News on Higgs boson
July 4 2012 Fabiola Gianotti and Joseph Incandela presented latest results from the experiments in the Large Hadron Collider (LHC) at CERN and told the world that there is high enough statistical probability in experimental data to prove that Higgs boson exists. (Telegraph news)

In 1993 this elusive elementary particle assumed to exist by Standard Model theorists was nicknamed the God particle by Leon Lederman despite of opposition from Peter Higgs himself who as an Atheist was worried that such a term might offend religious people. (I think Lederman's first term, "the goddamn particle", would be more offending!).


Higgs's original article presenting the model was rejected by Physics LettersWhen revising the article before resubmitting it to Physical Review Letters he added a sentence at the end, mentioning that it implies the existence of one or more new, massive scalar bosons, which do not form complete representations of the symmetry group; these are the Higgs bosons.
wikipedia

Nice intro to what is Higgs field/boson by Fermilab scientist Don Lincoln (youTube 3:27)


What has a Grammar School to do with particle physics?

Research of particle physics would have advanced anyway without young Peter Higgs going to a specific school. In the real world it happened so that Peter was sent to the Cotham Grammar School in Bristol, England (from 2001 Cotham School). His mother's simple decision had momentous consequences to the entire world.

Peter Higgs was born 29 May 1929 in Wallsend, North Tyneside, England. His father worked as a sound engineer for the BBC, and as a result of childhood asthma, together with the family moving around because of his father's job, and later the Second World War, Higgs missed some early schooling and was taught at home.

When his father relocated to Bedford, Higgs stayed behind with his mother in Bristol, and was largely raised there. He attended that city's Cotham Grammar School, where he was inspired by the work of one of the school's alumni, Paul Dirac, a founder of the field of quantum mechanics.
wikipedia


We see how significant for the entire world were the decisions by Peter's mother to stay in Bristol and to send her son to the eminent Secondary school. We can speculate what would have happened if all the family would have moved with the father to Bedford or if Peter was sent to Ashton Park School in Blackmoors Lane. But they stayed in Bristol and the boy was sent to Cotham Grammar School.


Not "just a teacher"
There probably is no such thing as "just a teacher". Every teacher has tremendous opportunity to affect the future of the pupils under his or her care. A teacher may miss that opportunity for various reasons but in general, so I believe, most secondary school teachers are aware of their importance.

In the case of Peter Higgs we can see a chain reactions where people are the catalysts.

God gives the baby to the parents -> parents raise Peter -> mother decides to put him in a respected secondary school -> the school has hired Paul Dirac as a teacher -> Peter gets interested in quantum theory.... -> ... -> at Edinburgh University Higgs gets interested in mass.

We can assume that the impact of teacher Paul Dirac on the future of Peter Higgs - and the entire world with him - was decisive. He was not "just a teacher" and probably the lessons he gave to the pupils at Cotham Grammar School were not "just another lesson". In fact, he may have been a bit strange teacher in the way some geniuses are strange. 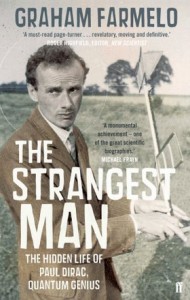 Paul Adrien Maurice Dirac, OM, FRS. 8 August 1902 – 20 October 1984) was an English theoretical physicist who made fundamental contributions to the early development of both quantum mechanics and quantum electrodynamics. He held the Lucasian Chair of Mathematics at the University of Cambridge, was a member of the Center for Theoretical Studies, University of Miami, and spent the last decade of his life at Florida State University.

Among other discoveries, he formulated the Dirac equation, which describes the behaviour of fermions, and predicted the existence of antimatter.
Dirac shared the Nobel Prize in Physics for 1933 with Erwin Schrödinger, "for the discovery of new productive forms of atomic theory."
wikipedia


Definitely not just another teacher - if there even is such a thing.